At a unique drive-in event that reflected the reality of America’s socially distanced election season, Biden lacerated the President over the pandemic, became apoplectic several times about Trump’s reported comments that US war dead were “suckers” and “losers,” and marveled that in a recent poll, foreigners expressed more trust in Russia’s Vladimir Putin and China’s Xi Jinping than in the President of the United States. The former vice president, in his element near his boyhood home of Scranton, Pennsylvania, also displayed the kind of sympathetic connection with voters that Trump, more at home in his rowdy rallies, struggles to approach.

Biden offered more compassion in a few moments for the victims of the Covid-19 disaster that has crushed the rhythms of normal life than the President has for most of this year.

Biden also seized on Bob Woodward’s revelation that the President understood the severity of the coronavirus back in January and February but did not share the details with the American people.

“The idea that you’re going to not tell people what you’ve been told, that this virus is incredibly contagious, seven times more contagious than the flu, you breathe the air, you get it sucked in your lungs. He knew it and did nothing, it’s close to criminal,” Biden said of the President.

While Biden offered coherence and demonstrated a facility of detail at the event, the central question of the election is whether Americans are looking for this kind of traditional presidential leadership. It’s still possible sufficient voters who prefer Trump’s cultural arguments rooted in race or his hardline law-and-order or economic message will give him an electoral college victory.

Thursday’s town hall came after yet another week when Trump has politicized his management of the pandemic and undermined government advice on mask wearing and social distancing.

The evening developed as a clear contrast to Trump’s own town hall on ABC two nights earlier, which was a flurry of misinformation and unjustified and callous self-celebration on the pandemic, featuring a blizzard of lies. 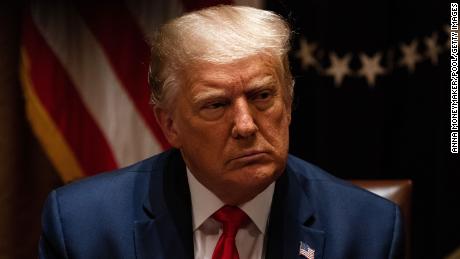 Biden is far from a perfect candidate. The former vice president, who appears fit but has aged in recent years, sometimes interrupts himself, or loses his train of thought. He interrupted one question from a woman who is the chief financial officer of her family’s potato farm in Pennsylvania who complained about regulations — though quickly apologized when she objected.

Biden came up with some misstatements of his own, for instance accusing Trump of holding the Bible upside down at his notorious photo-op outside a church opposite the White House. And it’s easy, too, now for Biden to ignore the demands of the left-wing of his party on issues like fracking and health care while the liberal base is compliant in hopes of ousting Trump. Republicans are trying to make the case that it will be different when Democrats are in power.

But Biden also came across as a serious person who had been briefed by experts on crucial details of the pandemic — on the lack of vaccine testing on children, for instance — and who had internalized the information and formed a strategy. The President has often ignored the complexities of the virus and prioritized his own political goals — never more so than when he publicly rebuked Dr. Robert Redfield, the US Centers for Disease Control and Prevention director, on Wednesday after he gave an extended timeline for public vaccinations.

Biden also took on Trump’s argument that mask wearing and local shutdowns recommended by health experts to suppress the virus are an infringement of basic American freedoms. In a rare evening of dueling events in this most stunted of campaigns, Trump told a rally audience in Wisconsin Thursday night, “Your home has become your prison.”

Compared to Trump, who is prone to going off on wild tangents, Biden’s arguments mostly flowed on logical lines. And unlike the President, who remained seated throughout his town hall event, Biden stood for the entire town hall, moderated by CNN’s Anderson Cooper. The President escalated his claims that Biden, who at 77 is only three years his senior, is not mentally able to take on the demands of the presidency.

“I mean I’m watching what they’re doing with Biden where he’s using teleprompters, ‘Move it up, move it up, I can’t see, I can’t see.’ He’s shot! He’s shot,” Trump said at his rally.

Yet the impression given by Biden on Thursday night was not recognizable from the President’s mockery, raising the possibility that Trump’s efforts to portray his rival as senile will backfire. 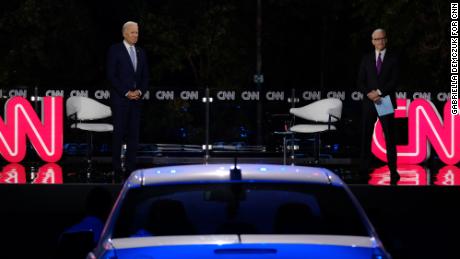 Biden made a particularly strong pitch on the economy, defining the election as a “campaign between Scranton and Park Avenue,” in a reference to the President’s history as a wealthy Manhattan real estate tycoon. Following criticism that his convention did too little to focus on blue collar issues that Trump rode to victory through the Midwest in 2016, Biden fumed that people had noted he’d be the first recent president without an Ivy League degree.

Again and again, the tragedy-scarred Biden absorbed the stories of loss and deprivation of his questioners — one, for instance, by a man who works in a cancer center and doesn’t even earn $15 an hour — by looking down and shaking his head, as if the emotional blow was his own.

He behaved in many ways like a President would be expected to behave in such circumstances, responding with logic, calm, humility and suggestions for action. In that, the town hall was almost a relic of a previous political age, not marked by presidential tantrums, incessant attempts to divide and demagogic appeals to a political base. Biden also sought to defuse the power of Trump’s law-and-order arguments by again condemning all violence — and wondered why Trump had not done the same in criticizing White supremacists.

While Trump is still trying to tear Washington down, Biden assumed the position of a long-term establishment player seeking to use government for the common good. It was another reminder of how this election has reversed the insider-incumbent and challenger-outsider dynamic. If sufficient voters embrace Biden’s vision of a future distinguished by more peaceful politics, it is difficult to see how the President can find a decisive line of attack to disqualify Biden in the six weeks remaining before Election Day. If there is still a boiling resentment at elites and Washington that can surmount the impact of a disastrously mismanaged national crisis on the part of the President, he may be as good as his word in finding sympathetic voters who are escaping the attention of pollsters.

The key test of the strategies of both men will come in less than two weeks, when they meet face-to-face for a crucial first debate for which this week’s town halls are effectively a warm-up act.

The Trump side of the contrast was on display at the Wisconsin rally — where a crowd packed in an aircraft hanger with little mask-wearing reflected the gulf in worldviews between Trump and Biden, who walked on stage in Pennsylvania wearing a mask.

The President raged against the coronavirus restrictions recommended by the medical experts and scientists in his own administration, suggesting that the media imposes a double standard, condemning his rallies but not condemning protests. As some in Trump’s crowd held campaign signs that said “Peaceful Protester,” the President once again said that he had started calling his events “protests” instead of “rallies.”