Professing Faith: The ‘reeducation’ of Uyghur Muslims in China

Khudobin success with Stars reminiscent of Thomas with 2011 Bruins

President Donald Trump sat at a table at the Arizona Grand Resort, flanked at a distance by local Republican leaders with ties to the Latino community.

“We’re here to discuss my Administration’s unwavering devotion to Hispanic American communities,” Trump said on Monday at the indoor event with cheering supporters. “I love you, and we’re taking care of you, and I’m never letting you down.”

Most Latinos disagree. The Trump Administration has failed to adequately respond to the pandemic, which has disproportionately affected Latinos. His immigration policy has been largely unpopular and resulted in families getting split apart. And he’s uttered racist insults since the day he announced he was running for President. Yet the Trump campaign is actively playing for Latino voters with a message centered around faith, family, law and order, and entrepreneurship.

“We can poke holes in those things, but those are the sincere arguments of Latino Trump supporters, and it seems like those arguments are at least enough to win a significant share of the Latino vote,” says Geraldo Cadava, a Northwestern University professor who focuses on Latinos and the Republican Party.

The Trump campaign has targeted Latinos with Spanish TV and radio ad buys. (The campaign did not share how much money it has spent on them.) Its Latinos for Trump initiative, launched in June 2019, includes 16 field offices in target states which have been hubs for door knocking and phone calls. On social media, the campaign’s presence includes an “Equipo Trump” Twitter account and a “VAMOS” Instagram hashtag. The President has a Latinos for Trump advisory board and has held roundtable events. It all adds up to a clear play for a group with growing influence in the electorate.

“It’s like a math problem, right? You want to add and not subtract. This is about addition,” says Trump 2020 senior adviser Mercedes Schlapp. “This is about adding to our party. This is about ensuring that we’re able to make inroads into these very crucial communities and take away from the Democrats.” 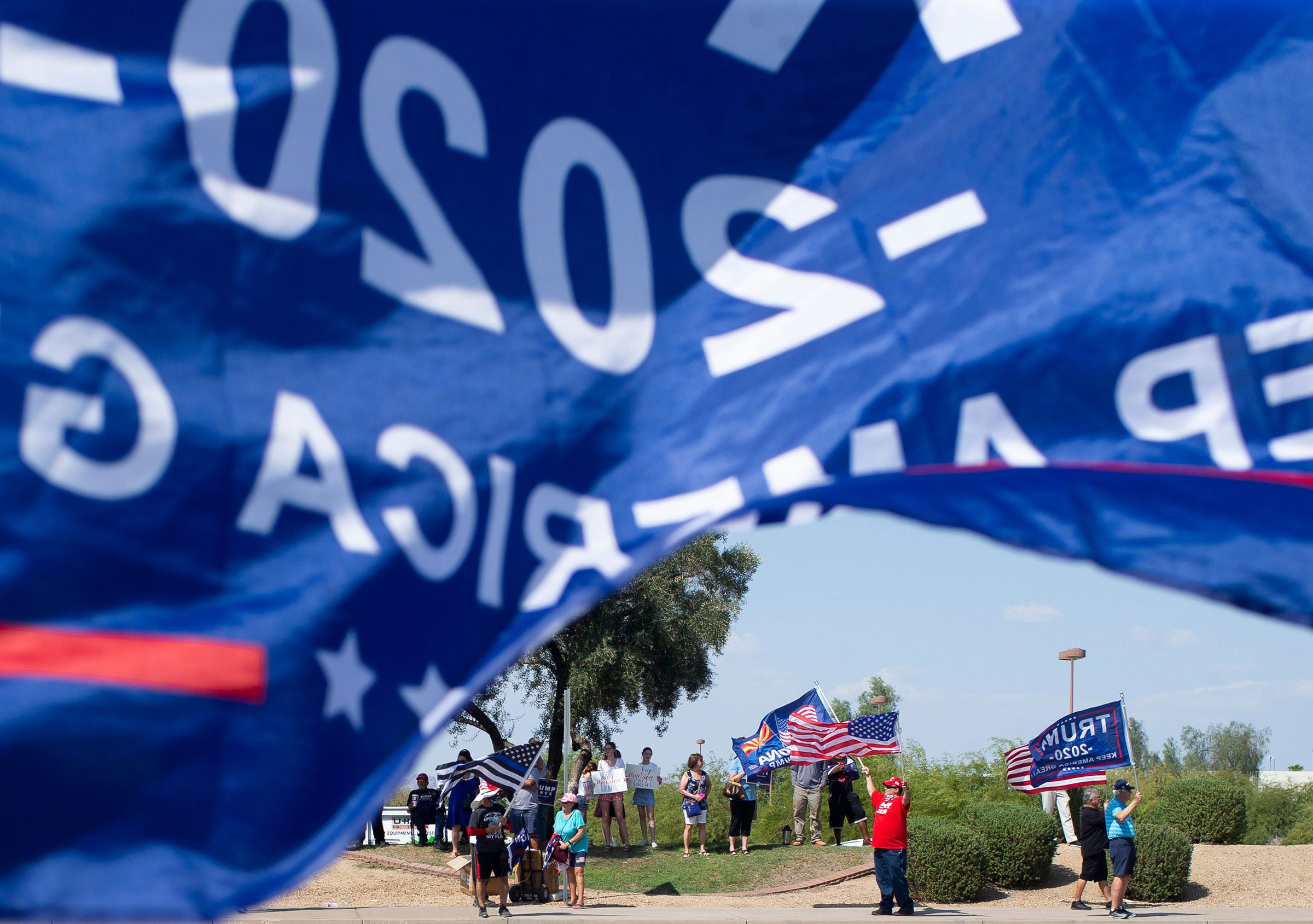 Supporters of President Donald Trump wait in line at the Arizona Grand Resort to hear the President speak at a “Latinos for Trump” roundtable in Phoenix on Sep. 14, 2020.

Nobody expects Trump to win the Latino vote. In 2016 he won 28%. In some states with large Latino populations, he did slightly better; in Florida, Nevada, and Arizona he notched 35%, 29%, and 31% respectively, according to CNN’s exit poll. This year, polling suggests he’s in the same range, despite policies that have hurt Latinos. There’s a chance he could maintain or even gain ground in these states, especially Florida. Recent polling by Equis Research, a progressive Hispanic research firm, for example, has Trump at 37% in Florida, 26% in Nevada, and 29% in Arizona.

“He has to do better than he did in 2016, and he certainly is,” says Carlos Curbelo, the former Florida Republican congressman, noting the campaign has had aggressive outreach to the Latino community during the last couple of years. “I don’t know how much room for growth he has, I think he’s probably maxed out right now. He certainly needs those voters because he’s lost some white suburban support.”

Stephanie Valencia, co-founder of Equis Research, says that it’s important to break down what’s happening in each state rather than just looking at Latino voters nationally. In Arizona, for example, Equis polling indicates there is what Valencia refers to as “Trump intrigue” among young, Hispanic men. In Florida, Trump has targeted the state’s large Cuban population by falsely attacking Biden as a socialist.

The thrust of the argument the Trump campaign is laying out for Latino voters depends on the circumstances before the pandemic hit: The economy was doing well, unemployment — especially among minorities — was down, and home ownership among Latinos was rising. But he’s also trying to stir doubt about Biden, and is capitalizing on the fact that Biden’s campaign has caught heat for not doing enough to court Latino voters.

Meanwhile, groups like the Lincoln Project, made up of conservatives who oppose Trump, are teaming up with Latino groups to help get out the vote for Biden. “If Latinos vote, they’re going to reject Donald Trump,” says Jacob Monty, a Republican donor who is on the Lincoln Project’s Hispanic Steering Committee and was a member of the 2016 Trump National Hispanic Advisory Council before he resigned.

Most Popular on TIME

How U.S. History Is Taught Has Always Been Political