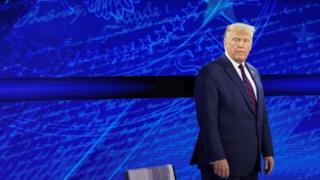 US President Donald Trump has denied downplaying the seriousness of Covid-19, despite admitting in a recorded interview to having done that.

At a televised event with voters, Mr Trump said he had “up-played” it.

The claim contradicts comments Mr Trump made to journalist Bob Woodward earlier this year, when he said he minimised the virus’s severity to avoid panic.

Mr Trump also repeated on Tuesday that a vaccine could be ready “within weeks” despite scepticism from health experts.

No vaccine has yet completed clinical trials, leading some scientists to fear politics rather than health and safety is driving the push for a vaccine before the 3 November presidential elections.

More than 195,000 people have died with Covid-19 in the US since the beginning of the pandemic, according to data collated by Johns Hopkins university.

Meanwhile, the magazine Scientific American on Tuesday endorsed a presidential candidate for the first time in its 175-year history, backing Democrat Joe Biden for the White House.

The magazine said Mr Trump “rejects evidence and science” and described his response to the coronavirus pandemic as “dishonest and inept”.

What did Trump say?

At Tuesday’s town hall meeting held by ABC News in Philadelphia, Pennsylvania, Mr Trump was asked why he would “downplay a pandemic that is known to disproportionately harm low-income families and minority communities”.

Mr Trump responded: “Yeah, well, I didn’t downplay it. I actually, in many ways, I up-played it, in terms of action.”

“My action was very strong,” he said, citing a ban imposed on people travelling from China and Europe earlier this year.

“We would have lost thousands of more people had I not put the ban on. We saved a lot of lives when we did that,” Mr Trump said.

The US ban on foreign travellers who were recently in China came into force in early February, while a ban on travellers from European countries was introduced the following month.

But Mr Trump has been accused of being slow implementing measures to curtail the virus.

In its statement on Tuesday, Scientific American said despite warnings in January and February, Mr Trump “did not develop a national strategy to provide protective equipment, coronavirus testing or clear health guidelines.”

What did he tell Woodward?

Woodward, who broke the Watergate scandal in 1972 and is one of the US’s most respected journalists, interviewed Mr Trump 18 times from December to July.

In February, Mr Trump indicated in an interview with Woodward that he knew more about the severity of the illness than he had said publicly.

According to a recording of the call, the president said coronavirus was deadlier than the flu.

“It goes through the air,” Mr Trump is heard saying on the tape. “That’s always tougher than the touch. You don’t have to touch things. Right? But the air, you just breathe the air and that’s how it’s passed.

Later that month, Mr Trump said that the virus was “very much under control”, and that the case count would soon be close to zero. He also publicly implied the flu was more dangerous than Covid-19.

Speaking on Capitol Hill on 10 March, Mr Trump said: “Just stay calm. It will go away.”

Nine days later, after the White House declared the pandemic a national emergency, the president told Woodward: “I wanted to always play it down. I still like playing it down, because I don’t want to create a panic.”

During the meeting, a group of ordinary people were given a chance to pose questions directly to the president. It was an unusual event for Donald Trump, who has long preferred speaking at campaign-style rallies.

One of the participants – Ellesia Blaque, an assistant professor who suffers from an inflammatory disease – asked about the president’s healthcare plan and if it would support people with preexisting conditions.

When Mr Trump interrupted her, she asked him to let her continue and he fell silent. It was a rare moment for the president. He typically surrounds himself by supporters and when reporters ask tough questions, he attacks them.

But he could not accuse Ms Blaque of having an agenda. She and others at the town hall event demanded answers in a way that few people have been able to. He assured her those with preexisting conditions would be protected under his plan but did not offer specifics.

It was the kind of real-time exchange that he has tried to avoid, and how she and others in the audience – and across the US – feel about his responses could help determine the outcome of the election.

What else did Trump say in Philadelphia?

Mr Trump, who is seeking re-election, repeated his earlier claim that the virus would disappear on its own because people would “develop… herd mentality”, likely referring to “herd immunity” when enough people have developed resistance to a disease to stop its transmission.

He also again cast doubt on the scientific advice of his own administration on mask-wearing.

The US Centers for Disease Control and Prevention strongly urges the use of face masks.

Mr Trump has made contradictory comments on face masks, on the one hand disparaging them as unsanitary, and on the other calling on Americans to “show patriotism” by wearing them. 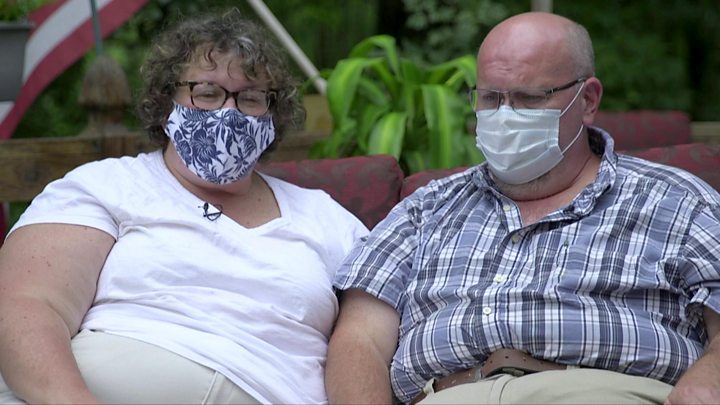 The Q&A meeting with undecided voters on Tuesday came as the presidential election battle entered its final stretches.

Mr Trump’s Democratic rival Joe Biden is expected to sit for a similar programme in Pennsylvania that will air on Thursday.

Pennsylvania is seen as a key battleground state in the race to the White House.