PHILADELPHIA – President Donald Trump denied downplaying the threat from coronavirus, telling a town hall on Tuesday that he “up played it” despite his assertion in a recorded interview  this year that he “wanted to always play it down.”

Trump made the remarks during a 90-minute town hall hosted by ABC News in the must win battleground of Pennsylvania, an event that served as something of a preview for the presidential debates that are set to begin later this month.

“Well, I didn’t downplay it. I actually, in many ways, I up played it terms of action,” Trump said in response to a question about an interview with journalist Bob Woodward in which he said he knew the coronavirus was more deadly and contagious than the flu but continued to compare the two so that people would not panic.

The town hall, which aired two weeks before Trump will take part in his first debate with Democratic nominee Joe Biden, featured an extended conversation about the president’s response to the COVID-19 pandemic. Trump defended his earlier assertion that the virus will eventually disappear – even without a vaccine – citing what he called “herd mentality,” an apparent reference to “herd immunity.”

Herd immunity is the notion that the virus is eradicated after a high percentage of the population is infected, limiting its ability to spread.

ABC described the event as being aimed at uncommitted voters, some of whom asked Trump questions about the coronavirus pandemic, the economy, climate change, and other issues. But the forum, which was prerecorded earlier Tuesday evening, also served as a preview of the presidential debates that begin Sept. 29.

ABC’s George Stephanopoulos anchored the town hall, and repeatedly attempted to push back on some of the claims that Trump has made at campaign rallies and at the White House in recent months. Asked why he had not produced a health care plan he has long promised will protect Americans with preexisting conditions, Trump said he has a plan “already” but declined to provide details about when it would be released. When he asserted “a lot of people” think masks are “not good” for managing the spread of the virus, Stephanopoulos pressed for an example of who was saying that.

“I’ll tell you who those people are: waiters,” Trump said. “They come over and they serve you, and they have a mask….They’re playing with the mask, so the mask is over, and they’re touching it, and then they’re touching the plate. That can’t be good.”

The president  dismissed the idea that he had downplayed the severity of the virus, despite recordings from Woodward’s interviews in which he told the journalist he thought downplaying it would help avoid a panic.

“I wanted to always play it down. I still like playing it down, because I don’t want to create a panic,” Trump told Woodward on March 19 in excerpts of audio interviews obtained by CNN.

At the time, Trump frequently compared the coronavirus to the flu, arguing that “nothing is shut down, life & the economy go on” during even the most deadly flu seasons.

The president’s responses on the virus drew fire from Democrats.

“This is the *current* PRESIDENT of the United States, whose charged with keeping the American people safe,” Biden spokesman Andrew Bates said of Trump’s response on herd immunity. “This would literally mean millions of deaths.”

“The Town Hall shows Trump for who he is. He isn’t a challenger, he’s an incumbent who can’t defend his record,” said Ronald Klain, a former Biden adviser. “People know that COVID is killing Americans and people don’t have jobs. Trump can lie, but that doesn’t mean that people believe his lies.”

In one particularly poignant moment, a Dominican woman who had recently become a U.S. citizen told the story of how her mother had recently died of cancer. She told Trump that he “made people closer” during the pandemic because they “learned how to love” their families.

Trump responded to the woman’s question about immigration before turning back to the coronavirus.

Trump recorded the town hall at the National Constitution Center, the lobby of which provides a picture window view of Independence Hall a few blocks distant, was the site of former President Barack Obama’s high-profile speech on race during the 2008 presidential campaign.

As he flew back from Philadelphia, Trump tweeted a photograph of himself on Air Force One with a large Philly cheesesteak sandwich on his desk.

“Great to be back in Philadelphia,” he wrote.

The first of three debates, set for Sept. 29, will come as some polls suggest a tightening race in some battlegrounds, including Florida and North Carolina.

Trump carried Pennsylvania by less than 1 percentage point in 2016. The suburbs of Philadelphia are among the most competitive in the country, though Trump is also seeking to run up turnout in more reliably conservative parts of the state.

The town hall aired on a day when the president secured a historic foreign policy victory: A pair of agreements formalizing diplomatic relations between Israel and two Gulf Arab nations, the United Arab Emirates and Bahrain. The foreign ministers of those Arab states joined Trump and Israeli Prime Minister Benjamin Netanyahu on the South Lawn of the White House earlier Tuesday for a signing ceremony. 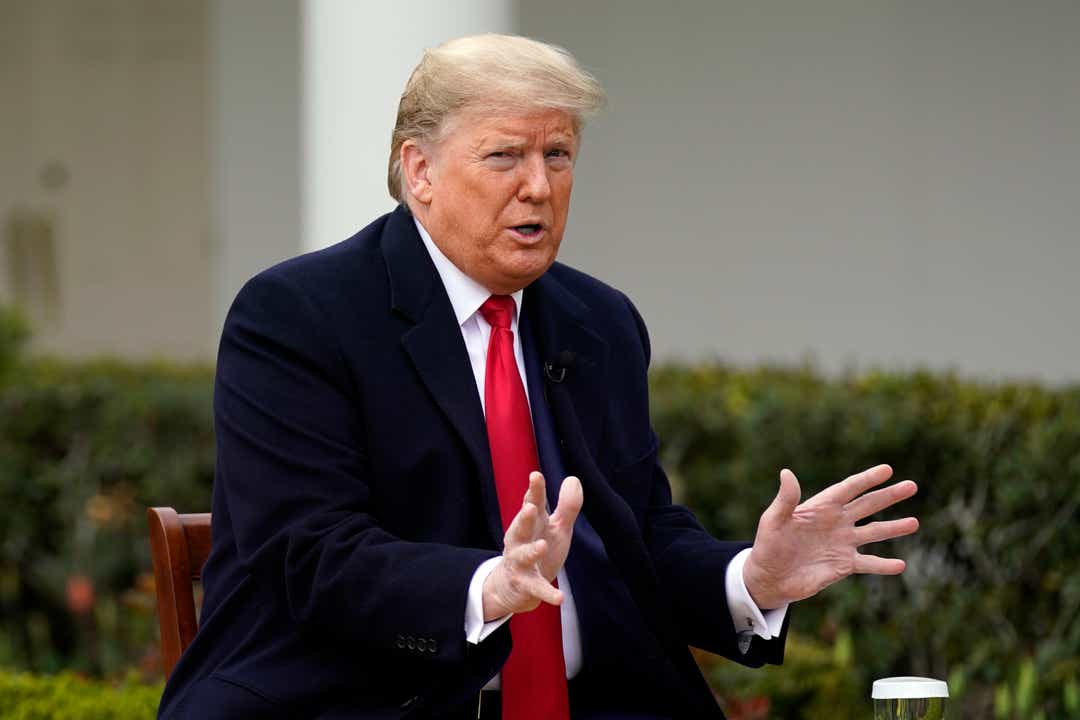