Astro Bob: Down in front on China’s Mars

What can the G-7 learn from China’s transition to climate-smart growth?

Will Europe Get Tough on China?

China wants to build a sustainable human presence on Mars. Here’s how.

China Is Quietly Stepping Up Its Interventions in Markets 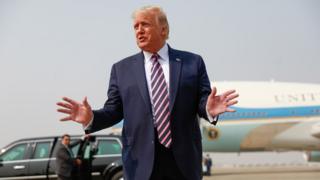 As forest fires blaze in the western states and a new hurricane hits the southern coast of America, President Donald Trump has caused controversy by questioning the science around climate change.

At the same time, he has called himself a “great environmentalist”, touting successes in conservation, wildlife protection and the banning of some off-shore drilling.

We have taken a look at what he has said and done on environmental issues.

These comments were in response to California Secretary for Natural Resources Wade Crowfoot, who said to the president: “We want to work with you to really recognise the changing climate.”

Mr Trump has received widespread criticism from scientific experts on this issue.

Dr Chris Brierley, an associate professor in climate science at UCL, said the world was getting warmer and would continue to do so.

And there is an overwhelming scientific consensus these rising temperatures are being driven by human actions.

Nasa, the US space agency, says: “Multiple studies published in peer-reviewed scientific journals show that 97% or more of actively publishing climate scientists agree climate-warming trends over the past century are extremely likely due to human activities.”

But the president has shown little, if any, commitment to tackling climate change and last year withdrew the US from the Paris accord, a multilateral agreement to tackle global warming.

Trump: ‘Right now we have the cleanest air we’ve ever had in this country, let’s say over the last 40 years.’

Over the past few decades, air quality – a measure of six major pollutants – has improved significantly in the US.

From 1970 to 2019, the overall level of these pollutants fell by 77%, according to the US Environmental Protection Agency (EPA).

And this trend has largely continued into Mr Trump’s administration, with a 7% fall between 2017 and 2019, which is why the EPA says the US currently has the cleanest air on record.

Air pollution in the US has been improving

Number of Days Reaching “Unhealthy for Sensitive Groups” Level or Above on the Air Quality Index (Among 35 Major U.S. Cities for Ozone and PM2.5 Combined)

But whether these achievements are a result of actions taken by the president or part of a longer-term trend away from polluting energy sources such as coal is contested by experts.

“The decisions of his administration to weaken numerous air-quality standards reveal his clear intent to worsen air quality in the long run,” says H Christopher Frey, a professor at North Carolina State University and former chief of the EPA’s air-quality scientific advisory board.

Other factors such as weather events can also have a heavy impact on pollution.

Trump: ‘We’re just a small speck. They make up a big preponderance of the pollution.’

President Trump said this in reference to China, India and Russia, seeking to downplay America’s contribution to greenhouse gas emissions.

“Nobody ever talks about that,” he said.

But the US is the second largest emitter of carbon dioxide worldwide, behind China.

And when you look at emissions per person, it ranks higher than all of the three countries Mr Trump mentioned.

Data is for 2017 for selected countries. Globally Qatar has highest C02 emissions per capita.

Source: Our World in Data

Trump: ‘I’m committed to ensuring the United States has the… cleanest water on Earth.’

The US is ranked 26th in the world on sanitation and drinking water, according to Yale University’s 2020 Environmental Performance Index (EPI).

On this ranking, Finland, Iceland, the Netherlands, Norway, Switzerland and the UK have the cleanest water.

The government has been criticised for repealing the 2015 Waters of the United States rule.

This had placed limits on polluting chemicals that could be used near bodies of water but was seen as restrictive for farmers and industrial workers.

“The revisions to the Waters of the US rule remove a significant number of waters and wetlands from the protection of the Clean Water Act, potentially impacting water quality and leading to the destruction of more wetlands,” says Hana Vizcarra, an environment lawyer at Harvard University.

Trump: ‘I signed the Great American Outdoors Act, the most significant investment in our national parks in over a century.’

The US Congress has approved $9.5bn (£7.5bn) of funding for national parks over the next five years.

The bill, supported by both Democrats and Republicans, will also increase by $900m a year funding for the Land and Water Conservation Fund, created in 1965.

President Trump had previously expressed support for cutting funding for conservation but changed his mind this summer and signed the bill into law.

But although this legislation has been widely praised, most have stopped short of calling it the largest investment in over a century.

And National Parks Conservation Association president and chief executive Theresa Pierno says: “This is the largest investment our country has made in our national parks and public lands in more than 50 years.”

Send us your questions