Republicans look ahead to 2022 elections at Greene County Lincoln Day

Apostolic Journey to the Republic of Iraq: Holy Mass at the Chaldean Cathedral of “Saint Joseph” in Baghdad (6 March 2021)

LeBron James’ More Than A Vote releases ‘You With Us?’ commercial

At least a dozen New Jersey students tested positive for coronavirus after attending a party over Labor Day weekend. As a result of the COVID-19 outbreak, Chatham High School has turned to virtual classes for two weeks, according to a letter dated Sept. 11 from the superintendent of Chatham School District.

AMID CORONAVIRUS, IS IT SAFE TO SEND CHILDREN BACK TO SCHOOL? EXPERTS, PARENTS WEIGH IN

“Based on its contact tracing process, the Department of Health believes there was likely active transmission of the virus at a non-school event over the weekend, though it is possible that there may have been other gatherings during or before the weekend where transmission could have occurred. Based on the ongoing nature of this turn of events, Chatham High School will remain on virtual instruction for the next two weeks. We will plan for in-person instruction to resume on Sept. 29,” Michael LaSusa, the superintendent, stated in the letter.

“All extracurricular activities are also suspended during this time,” he added. 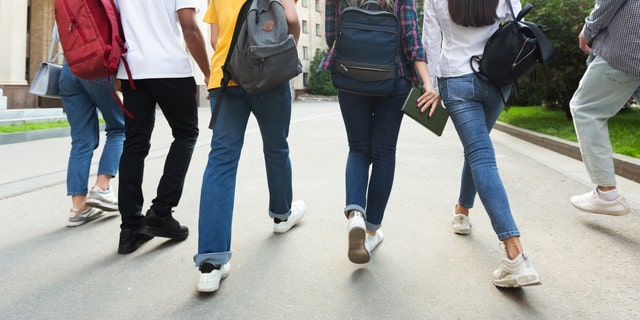 At least a dozen New Jersey students tested positive for coronavirus after attending a party over Labor Day weekend. As a result of the COVID-19 outbreak, Chatham High School has turned to virtual classes for two weeks. (iStock)

The superintendent credited safety measures put in place for preventing transmission of the virus in school.

“The Department of Health officials indicated that they believe the mitigation strategies implemented in school, particularly the wearing of face coverings, make it unlikely that transmission took place within school this week. They also indicated that they believe the early action and response on the part of a number of students and parents has been helpful in addressing this situation quickly,” he said in the letter.

Chatham Mayor Thaddeus Kobylarz and Police Chief Brian Gibbons expressed their frustration during a Borough Council meeting Monday night, saying the Sept. 6 back-to-school party was “unwisely held,” according to a report in the Chatham Courier. The school closed on Sept. 10, just two days into the school semester, according to the report.

“At least nine of these students are in Chatham Borough,” Kobylarz said during the meeting, according to the article. “We do not know how big this outbreak will be. We do not know how many secondary infections there will be.”

“We are deeply troubled by this incident. We are especially concerned for children and older household members. We are concerned that this kind of self-inflicted injury would occur here in Chatham Borough,” Kobylarz stated during the meeting.

The mayor asked the public to maintain social distancing and wear a mask.

“Most of all, avoid these unnecessary large gatherings where you don’t know if someone is infected or not,” he added, per the report.

“This could be a matter of life or death,” he was quoted as saying.

“It was in very poor judgment to hold the party right before school. It was selfish on the part of the parents. This undermines all the efforts the school district has taken to get school back on track,” Gibbons said during the council meeting, per the local media outlet.

The report also said the police chief stated there will be an investigation, noting that “this is about protecting families from a terrible disease. I think it could be a case of criminal liability.”

Town officials strongly recommended during the meeting that the public cooperate with contact tracing efforts and self-quarantine to contain the virus outbreak, the media report said.

Meanwhile, LaSusa, the superintendent, said in his letter that the school will be sanitizing and ventilating all classrooms and spaces over the two-week period. It plans to reopen on Sept. 29.