Dwayne ‘The Rock’ Johnson vs. Donald Trump: A serious comparison

The difficulties of being gay in Iran | DW

No. 9 Iowa faces No. 4 Ohio State; both stung by recent losses

Sun Sentinel – We are currently unavailable in your region

Days after successfully suing the United States Postal Service over misleading election flyers sent to hundreds of thousands of Colorado residents, Secretary of State Jena Griswold is asking the federal government to correct its error and pay for a new mailer with correct information.

Late Saturday, a federal judge issued a temporary restraining order that prevented the Postal Service from sending the flyer after Griswold and Attorney General Phil Weiser alleged the mailer has the potential to make voters “wrongly believe that they may not participate in the upcoming election.” The postcards were mass produced for distribution across the country and offered general guidance for how to vote by mail in the 2020 election.

The Postal Service challenged the court order but lost. In an interview with Colorado Matters, Griswold said she was surprised to see mailing officials defend their actions and sees it as part of the Trump administration’s continued attacks on mail-in ballots.

“Unfortunately we are seeing a pattern of voter suppression out of the White House,” Griswold said. “And unfortunately, part of that is using USPS to try to sow confusion and disenfranchise voters for November.” 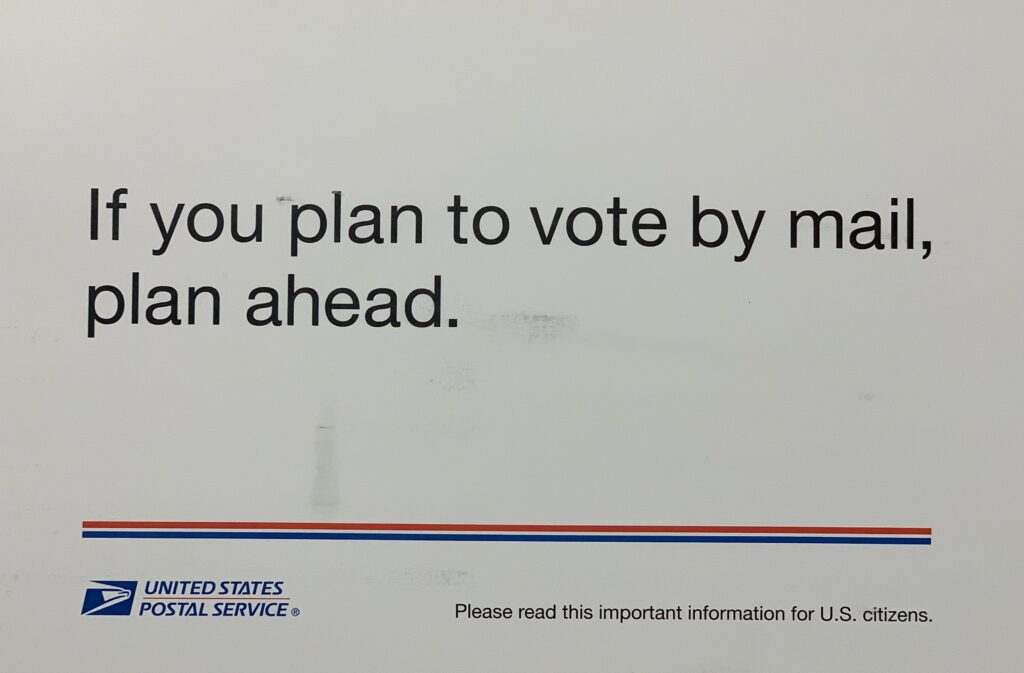 Rachel Estabrook/CPR News The front of the U.S. Postal Service mailer that Coloradans should expect to receive in September 2020.

About 330,000 flyers were pulled from processing, but a significant number is still set for delivery. Graves said it would be difficult to prevent the distribution of the remaining flyers.

“Because the postcards are intermingled with the other mail and cannot be readily separated, the clerks and carriers would be required to inspect the mail that they deliver to each address in order to ensure that no postcard has been placed within that mail,” Graves wrote in a court filing. “This would be a multi-day process.”

Colorado is at the forefront of the national debate surrounding mail-in ballots. Since 2013, the state has automatically mailed ballots to all active registered voters, whether they request one or not. With President Donald Trump making false statements about the security of mailed ballots and many states opting to expand vote-by-mail in the face of the coronavirus, Griswold has pointed to Colorado’s election model as a sign that the system works.

“Here in Colorado, we know the truth,” Griswold told Colorado Matters. “Colorado has a history of extremely clean elections, and we are the national standard, not only for voter participation, but also election security.”

Griswold said a hearing to determine whether the Postal Service will send a more accurate mailer is scheduled for this Friday.

CPR will not compromise in serving you and our community. Vital news and essential music are made possible by member support.