A bust of the lone Black adventurer in the Lewis and Clark expedition mysteriously appeared in an Oregon park. Who was York?

Turkey-Iran tensions on rise ahead of possible Sinjar operation

(CNN)President Donald Trump’s reelection campaign may be the least truthful and most divisive in modern American history.

In recent days, the President has accused Democratic nominee Joe Biden of being mentally “shot” and “on drugs,” and implied that the 77-year-old will not be fit to serve within a month of taking office — a crude attack on a rival only three years his elder. His disparagement of Democratic vice presidential nominee Kamala Harris has taken an increasingly racist and sexist tone. And during a riotous campaign swing, he claimed Democrats generally want to “lock law-abiding Americans in their homes.”

Trump is also escalating false claims that the election will be rigged, claiming that mail-in voting is “unconstitutional” — an outright lie. And he’s resorting to ever-more inflammatory rhetoric to scare up the votes of White suburbanites: “Does anybody want to have somebody from Antifa as a member, as a resident of your suburb? I don’t think so,” Trump said Thursday, conjuring a fantasy of picket-fenced suburbs under invasion.

What is he up to? Of course, Trump loves saying outrageous things to get a rise from crowds. But he also needs to win over more voters than the typical 42% or so who think he’s doing a great job. And his turn toward the unhinged reveals a huge bet at the center of his reelection bid.

Portraying America as a land in flames and inciting racial divides may not win the moderate middle, but the Trump campaign believes there could be millions of Americans who quietly identify with his tribalism and extreme rhetoric — and who will show up to vote in November instead of taking a pass as normal. It’s a long shot, but if they are right, all the polls showing Biden as the frontrunner could be shown to have made false assumptions about the electorate.

‘Now I can be really vicious’

Despite his flame-thrower rhetoric, Trump says it’s Democrats who’ve crossed the line. On the campaign trail this weekend, the President complained that Democrats had been unfair to him by seizing on his reported remarks that US war dead in France were “losers” and “suckers.” “Pathetic Joe, he’s a pathetic human being to allow that to happen,” Trump said at a rally in Nevada Saturday night, concluding: “Now I can be really vicious.” 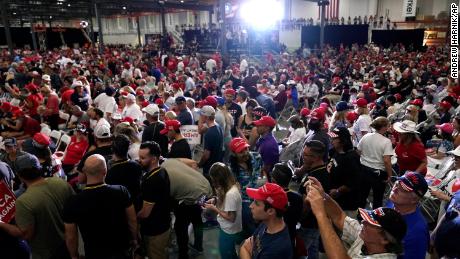 Supporters wait for Trump to speak Sept. 13 in Henderson, Nevada.

On Sunday, Trump held his first fully indoor rally in months— a choice expected to violate the state of Nevada’s coronavirus restrictions on large gatherings. 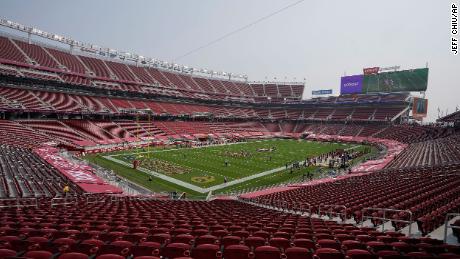 Huge crowds might also have been expected in US football stadia, which hosted the first games of the season on Sunday — but the NFL took a different tack, telling fans to stay home for their own safety. Above, Levi’s stadium in Santa Clara, California, where the San Francisco 49ers played the Arizona Cardinals.

‘The last vestiges of the Flat Earth Society of this generation’

Los Angeles Mayor Eric Garcetti is having none of the President’s tendency to blame Western states’ devastating wildfires on poor forest management or insufficient “raking.” “This is climate change,” Garcetti told CNN’s Jake Tapper on “State of the Union.” He criticized the Trump administration, which has generally pursued policies that reduce protections for the environment, as hosting “the last vestiges of the flat Earth society of this generation.” “We need to reduce the carbon emissions that we have, and we need to make sure we can manage that water,” he added. “This is not about just forest management or raking. Anybody who lives here in California is insulted by that, quite frankly, and (Trump) keeps perpetrating this lie.”

First in line for a jab?

We asked readers last week whether you’d be at the front or back of the line for a potential Covid-19 vaccine. Here’s what you said.

“No, I will not get in the line for a coronavirus vaccine,” writes Damien in Paris. “Vaccines take years to research and more years to test. Rushing science is not a good idea. We must learn, as a society that lives increasingly in tight packed cities, to adopt hygenic practices in our daily lives. When and if there is a vaccine, I will wait a few years to see if it seems efficient and harmless.”

In Pennsylvania, Kathy seemed to agree: “With virtually EVERYTHING being politicized by Trump who would feel safe taking some half-baked vaccine!? NO WAY!!!!!”

Guy in Belgium said that he would happily volunteer to take it if it would help advance the science. “As I am 67 and fit, I could be a good test person for the study here in Belgium.”

We got a conditional yes from Alan in South Africa. “It would depend on the supplier of the vaccine and who endorses it. A vaccine released by Trump — I would be at the end of the queue. Endorsed by Faucci and/or created, tested and released by other Western nations, I would be at the front of the line,” he said.

And Carolyn said she would trust a vetted vaccine — but would wait for the most exposed members of society to get the jab first.: “I’m a 68-year-old White female Democrat. I think essential workers should be first in line. Then the most vulnerable. Then those over age 65 followed by the young and healthy. Finally at the end of the line all those who are not practicing social distancing or wearing masks. I think that would serve some justice to all those who could have easily helped their fellow man but refused.”