Hurricane Sally is quickly approaching the Gulf Coast. The West is still on fire. And yes, we’re still very much in a pandemic.

But first, it’s Steve Martin! Maybe? The 75-year-old star, concerned about his fans not being able to recognize him in a mask, came up with a helpful hack: He scrawled “Steve Martin” in red marker across an obviously-homemade cardboard sign. In case you were still confused, he also included an arrow pointing directly to his face.

Less than three weeks after Hurricane Laura devastated Louisiana, Sally is barreling toward the Gulf Coast – potentially making landfall as a Category 2. “I know for a lot of people, this storm seemed to come out of nowhere,” Louisiana Gov. John Bel Edwards said. “We need everybody to pay attention to this storm. Let’s take this one seriously.” As it lurches over the Gulf Coast, Hurricane Sally could bring 8 to 16 inches of rain, and some areas could see up to 24 inches.

Tens of thousands were displaced from their homes after Laura. More than 82,000 people remain without power in Lake Charles and southwestern Louisiana. More than 210,000 households don’t have clean drinking water. Sally is the seventh hurricane of the 2020 Atlantic hurricane season. 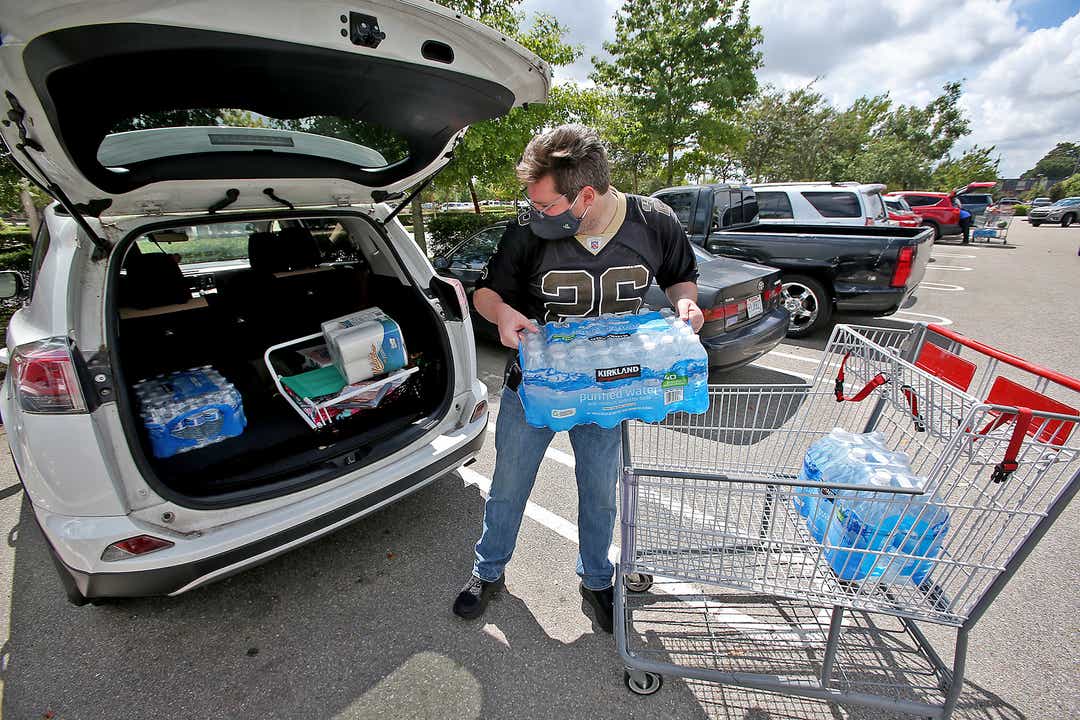 The FBI is investigating allegations that celebrity cheerleader Jerry Harris solicited sexually explicit photos and sex from minors, multiple sources told USA TODAY. Agents executed a search warrant Monday afternoon at a home in Naperville, Illinois, as part of that investigation. Harris, who gained national prominence when he was featured in Netflix’s recent “Cheer” docuseries, has not been criminally charged. The 21-year-old could not be immediately reached for comment. The criminal investigation is based on allegations that were reported separately to police by Varsity, a private company that dominates the cheerleading industry and handles everything from uniform sales to major competitions.

What everyone’s talking about

50 days until the election

There are 50 days until the presidential election. Is your vote still undecided? If so, you’re part of a key voter bloc for both Donald Trump and Joe Biden. And you’re not alone. Hundreds of thousands of Americans are still unsure of who they plan to support – or if they’re going to vote at all. Polls show Biden maintaining a roughly 7-point lead nationally over Trump, according to the Real Clear Politics average. But the lead has narrowed, even more so in the swing states that are expected to decide the presidency. USA TODAY interviewed several undecided voters. Here’s what they had to say.

Democratic presidential nominee Biden on Monday cited climate change as a key factor in the fires blazing through much of the West, but Trump instead placed the blame on “forest management” during a briefing in Northern California. “This is another crisis, another crisis he won’t take responsibility for,” Biden said. “If you give a climate denier four more years in the White House, why would we be surprised that we have more America ablaze?” And California Gov. Gavin Newsom told Trump forest management is an issue, but “climate change is real, and that is exacerbating this.”

One ticket to Venus, please

Forget Mars. Scientists have discovered a possible sign of life in the clouds of Venus, according to a new study. Using telescopes based in Chile and Hawaii, astronomers spotted in Venus’ clouds the chemical signature of phosphine, a noxious gas that on Earth is only associated with life. Still, further observations are needed to explore the origin of phosphine in Venus’s atmosphere, scientists said. “This means either this is life, or it’s some sort of physical or chemical process that we do not expect to happen on rocky planets,” said study co-author Janusz Petkowski.

A break from the news

This is a compilation of stories from across the USA TODAY Network. Want this news roundup in your inbox every night? Sign up for The Short List newsletter here.