WASHINGTON — When Republicans gained control of the White House and both chambers of Congress in 2017, disruption was in the air.

But today, as Republicans try to hold on to the Senate amid fears of a “blue wave” this November, they are defending the new status quo against threats of Democratic disruption that could be unfriendly to financial services.

“You’d be able to hear a collective sigh of relief no question from the banking industry lobbyists if the Senate remains in Republicans hands,” said Camden Fine, president and CEO of Calvert Advisors.

The Democrats, which are favored to retain House control, need to win a net total of four seats to hold a clear majority in the Senate. If Joe Biden wins the presidency, they would only need to flip three seats since his running mate, Kamala Harris, would break the tie.

But a Republican victory in the upper chamber of Congress could result in a new chairman of the Senate Banking Committee, with the potential departure of Sen. Mike Crapo, R-Idaho, opening the door to Sen. Pat Toomey, R-Pa., leading the panel. 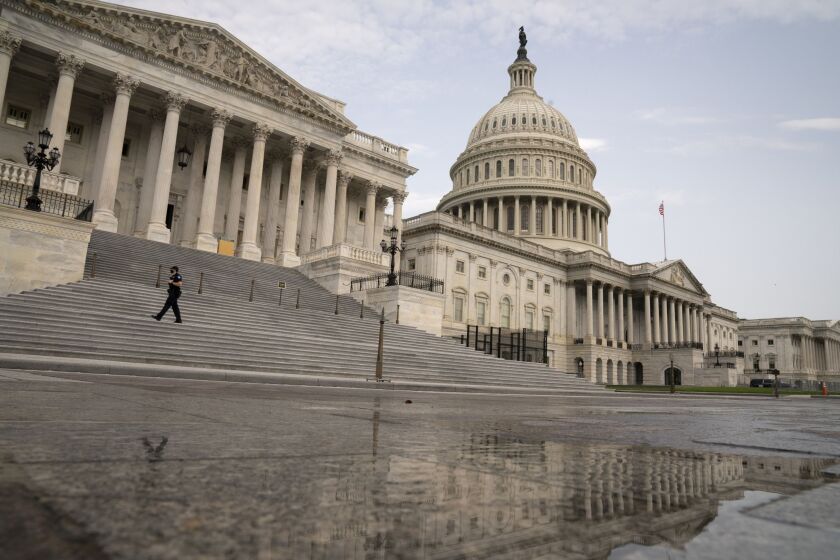 A GOP victory in the Senate and a Democratic victory in the House would mean another two years of a divided Congress and low odds of legislative progress on financial services legislation.

“If the gavel passes to Toomey, I think you are going to see more of a focus on capital formation,” said Brian Gardner, an analyst at KBW. “It’s an issue that I think he has been interested on in the past.”

Still, the impact for banks of the GOP holding on to the Senate would be less about achieving new legislative wins and more about preventing Democrats from reversing the policy victories achieved during the Trump administration.

Under a scenario in which Biden wins and the Democrats control the Senate, banks could confront a greater focus on policy reforms such as giving the U.S. Postal Service banking powers, requiring regulators to write rules addressing social justice in the financial sector, and new taxes on financial transactions.

By contrast, even though a GOP-controlled Senate would likely not pursue new reg relief measures or other reforms sought by banks, the industry would still benefit from Republicans playing defense, especially if Biden wins.

“For banks, if the Republicans retain control of the Senate, right away banks can breathe a sigh of relief with items like a transactions tax,” Fine said. “I think various financial services taxes across the board would be nonstarters regardless of what the House of Representatives sent over to the Senate.”

In a divided Congress, a GOP victory in the Senate means legislative progress of any kind is unlikely. Indeed, one of the the industry’s biggest legislative priority — cannabis banking reform — would be more likely to pass if the Democrats controlled both chambers.

“If Republicans maintain control of the senate, I don’t see legislation quite frankly,” said Ed Mills, a policy analyst at Raymond James. “I think the only way we see legislation is a Democratic sweep and even then it’s in doubt.”

A former Democratic Senate staffer added that there isn’t as much interest in regulatory reform as there was at the beginning of the Trump presidency. The 2018 enactment of S 2155, a targeted bill that eased certain provisions of Dodd-Frank, appeared to be the extent of reg relief changes that could be supported by a crucial 60-vote majority.

“We don’t have the same clamoring for changes that we had leading up to S 2155,” the former Democratic Senate staffer said. “There has to be a handful of issues that are crying out for attention and there’s enough stakeholders pushing for.”

Yet Toomey could bring a change of approach to the Banking Committee if he takes the gavel. (Crapo could have an opportunity to chair the Senate Finance Committee.)

Some observers say Toomey could pay less attention to regulatory relief for traditional banks and more on general capital markets issues. The committee could also focus more on relations with China under his leadership.

“My bet would be that tensions with China escalate and I think it would be the topic of the day,” said Isaac Boltansky, director of policy research at Compass Point Research & Trading. “There are competition questions that I think that the Senate Banking Committee would look to answer. Especially when we talk about to what degree they are liberalizing access to mainland China for financial services companies.”

Regardless of which party controls the Senate after the November elections, Congress will still be focused on the economic impact of the coronavirus pandemic. Banks have played a pivotal role in the economic response to the pandemic, through participation in the Federal Reserve’s emergency lending facilities and the Small Business Administration’s Paycheck Protection Program.

“If Senator Toomey is there, I would imagine [the committee would conduct] a fair amount of Fed oversight,” Boltansky said.

But in terms of legislation, a GOP victory in the Senate likely means another two years of a divided Congress with the Democrats expected to hold on to the House.

With the two chambers controlled by different parties, lawmakers would probably continue to hit a stalemate on the biggest financial policy areas, particularly how to reform the housing finance system dominated by Fannie Mae and Freddie Mac.

“I think housing reform is the top issue on the agenda right now, but I just don’t see any way the House and Senate are going to come to an agreement,” Verret said.

With reports growing of small-business loan applicants committing fraud with respect to the Paycheck Protection Program, Gardner said a Republican Senate would likely focus more on the borrowers who allegedly committed fraud, rather than the lenders who participated in the program.

Fine said a Republican-controlled Senate would likely be more lenient on PPP loans that were given to larger corporations than Democrats.

“I think the Democrats would view PPP loans to major corporations and so forth much more harshly than a Republican-controlled Senate,” he said. “I think the partisanship starts when you get into the truly large businesses that got those PPP loans and some of the Wall Street banks that were handing that stuff out.”

If Biden wins the presidency and the GOP retains control of the Senate, observers said there could be more attempts at dealmaking between Congress and the White House on banking issues such as nominees to run the regulatory agencies.

“Biden to his core is a legislator,” Mills said. “He will look to see what deals he can strike but we have to recognize the polarized environment that we all live.”