Minden, Nevada (CNN)Attendees at a Nevada campaign rally for President Donald Trump on Saturday appeared to not be social distancing, and few people were seen wearing face masks.

When gates to the Minden, Nevada, rally opened just before 5 p.m. local time, hundreds of people rushed to the front grabbing for chairs and squeezing in, all while music by Elton John and Queen blasted throughout the venue. The rally-goers had been waiting in line for several hours to get inside the airport rally, which is being held on the tarmac of the general aviation field.

Trump supporter Maria Ainsclugh said she is excited to join a sizable crowd to hear the President speak. She said she feels safe and rejects the idea of wearing masks because she doesn’t believe the pandemic is as serious as health experts say.

“I see people wearing masks on the street, avoiding getting close to other people — it’s sad. We have to be out and interacting, that’s how we become immune. We need to develop immunity,” Ainsclugh said.

Asked if she was concerned about catching the virus, she said no.

“It’s been eight months — I think I’m immune. And if I get it, I go to the hospital a few days. It’s not that bad,” Ainsclugh said. 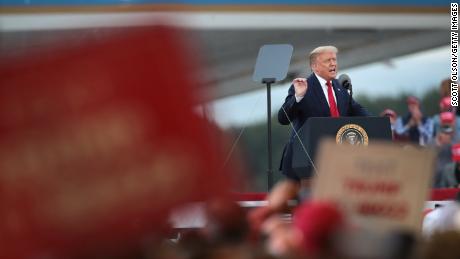 63 seconds that shows why Trump politicizing mask-wearing is so, so destructive

The area near the stage was packed just ahead of Trump’s arrival but the whole event site was not full. There was unhealthy air quality in the area due to ongoing forest fires in California.

The campaign earlier offered vague explanations as to how it will adhere to Covid-19 mitigation protocols in Nevada for the rallies the President plans to hold this weekend.

Trump’s recent campaign events have violated state mandates put in place to stop the spread of the coronavirus pandemic. Trump’s rally in North Carolina on Tuesday violated Democratic Gov. Roy Cooper’s mandate that outdoor gatherings be limited to 50 people. The President and most of his gathered supporters also did not wear masks, despite a statewide mask mandate in North Carolina.

And at rally in Michigan earlier this week, attendees were not wearing face masks, one of the few proven ways to mitigate the spread of Covid-19.

When asked specifically if the campaign plans to limit the number of people that will be allowed into the rally, a campaign official said, “Every attendee will get a temperature check prior to admission, be provided a mask they’re encouraged to wear, and have access to plenty of hand sanitizers.”

But health experts have stressed that people can still spread the virus even if they don’t have symptoms, like a fever, which makes it all the more important to wear a mask.

Douglas County Commissioner Dave Nelson told CNN on the phone Friday night they had only eight cases of coronavirus in the county and he was “sure people would use common sense” and that “Douglas county is conservative and proud to host the President.”

Despite warnings about crowds leading to greater spread of the virus, Trump is continuing to hold rallies. The next one is scheduled for Sunday in Henderson, Nevada.

CNN’s Ryan Nobles and Glen Dacy contributed to this report.